Yup, I'm alive and I've even done some sewing!  Not clothes but stuff that will be used even MORE than clothing by little Baby No Name (STILL!!!  We've only got 5 or 6 more days until he's BORN for pete's sake!  lol) 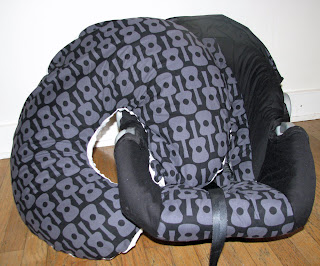 Anyway, I wanted a new car seat, but really, there was NO WAY I was going to buy a new one.  I didn't NEED a new one, I was just tired of the way the old one looked.  I was fairly certain I could recover it on  my own but I've never attempted anything like that before, so when I saw Puking Pastilles  Car Seat Cover Tutorial on sale for only $3.99 I figured I'd bite the bullet and give it a try.

Now, I've been horrible about taking "before" photos of stuff, so you'll just have to peel your eyes away from the cutie IN the car seat in the picture and get an idea what it looked like before. 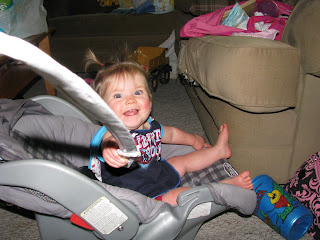 and yes, if you look closely that plaid is purple.  Ezekiel was born in the winter and we had one of those great bundle me things over it so you never saw it with him.  Again, wasn't really anything wrong with it, I was just tired of it.
So, I bought some Michael Miller Groovy Guitar fabric and paired it with a black sheet in  my sewing stash and came up with this. 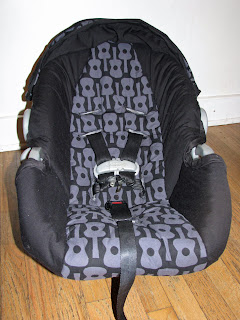 The cover I could have easily done on my own, but once I got to the canopy I was more than happy to have spent those four bucks to have someone walk me through it.  Made it SOOO much easier! 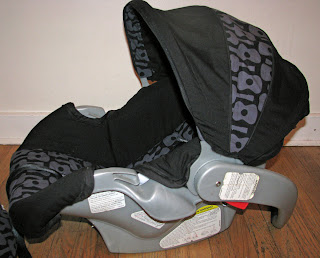 (and thanks mom for sewing the final bias tape on for me!  ;)
and once I got this finished up and my littles were still sleeping I whipped up a matching Boppy cover with some more of Michael Miller's Groovy Guitar fabric and some minky I had stashed away.  I looked at all the pre-made ones (ya know, Target, WM, etc) and they were just not my taste at all, so I made my own.  Easy peasy!  No pattern, just traced an old one and went to town.  There is a velcro closure on the back and it's super soft.  I love the way it turned out! 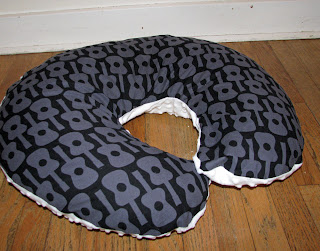 and THAT is what I was up to yesterday.  ;)  Hoping to get some more stuff finished up before next Thursday if my fabric comes in.
Posted by Gina at 7:04 PM 1 comment:

Now, I'm not making a big commitment to sew 1 hour every day for seven days (like the challenge is to do) because, let's get real, I'm going to have an almost two week old!  BUT, I am hoping I can sneak in some time here and there and at least get Grace some new spring duds.  I think the other two probably have enough...but that's never stopped me from making more before!  lol

Email ThisBlogThis!Share to TwitterShare to FacebookShare to Pinterest
Labels: sewing

Just wanted to share, Dana, over at Made, and Rae from Made by Rae are having their Celebrate the Boy month again starting on Tuesday Feb. 15!

They did this last year and to be perfectly honest, Dana's 90 Minute Shirt tutorial is what opened my eyes to the fact that I could sew!!! (needless to say I'm a *WEE* bit excited to see what all they teach us this year!)  There are sooo many great ideas, clothing, home decor, crafts, toys and everything else you can think of. 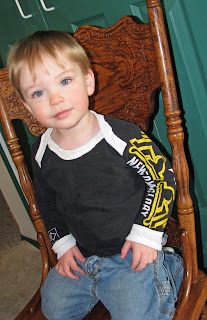 (awww...doesn't he look so little?  And totally adorable?!?  I kinda miss this hair cut.)
You can check out all the details here...and I'm really hoping this will spur me on to get stuff made MY boys' room!  (so weird to type that in the plural...especially since tiny baby boy still has no name!)

Anyway, I can't wait till the kick off and hopefully I'll have all sorts of BOY things to share with you over the next month too!
Posted by Gina at 8:50 PM No comments:

Email ThisBlogThis!Share to TwitterShare to FacebookShare to Pinterest
Labels: randomness

So, what has happened to convince me that all is not as it should be in the world? 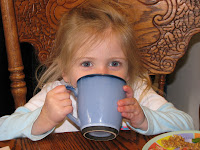 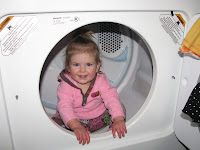 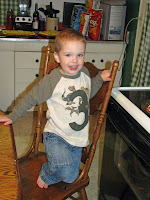 Well, these three cute faces...ALL asleep.  At naptime.  At the SAME TIME.  AND, within five minutes of laying down.  Now, that's not just a rare occurance in my home.  It's something that NEVER happens.  But I'm here and praising God that He always knows what I need...and today I NEEDED for them all to sleep...at the same time.

Because, let's be honest shall we?  I was NOT winning any mother of the year awards this morning.
Posted by Gina at 12:31 PM No comments:

“Oh God, be Thou exalted over my possessions.
Nothing of earth’s treasures shall seem dear unto me if only Thou are glorified in my life. Be Thou exalted over my friendships.
I am determined that Thou shalt be above all,
though I must stand deserted and alone in the midst of the earth.
Be Thou exalted above my comforts.
Though it mean the loss of bodily comforts and the carrying of heavy crosses I shall keep my vow made this day before Thee.
Be Thou exalted over my reputation.
Make my ambitions to please Thee even if as a result I must sink into obscurity and my name be forgotten as a dream.
Rise, O Lord, into Thy proper place of honor,
above my ambitions,
above my likes and dislikes,
above my family,
my health and even my life itself.
Let me decrease that Thou mayest increase,
let me sink that Thou mayest rise above.
Ride forth upon me as Thou didst ride into Jerusalem mounted upon the humble little beast,
a colt, the fold of an ass,
and let me hear the children cry to Thee, ‘Hosanna in the highest.’”
The Pursuit of God
- A.W. Tozer
Posted by Gina at 11:04 AM No comments:

Email ThisBlogThis!Share to TwitterShare to FacebookShare to Pinterest
Labels: faith 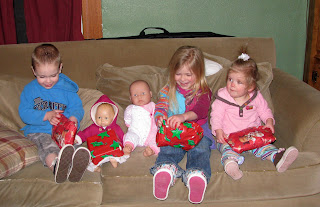 Christmas eve the littles all opened one present (new PJs...just like half of America!  lol)  Kessa and Gabi got matching ones from American Girl that I snagged on e-bay...and the other two got jammies from Target.  Not gonna lie, I was disappointed in the jammie selection available this year...I looked at a lot of stores!  Oh well, they could have been old and holey and the kids would have loved them!  :) 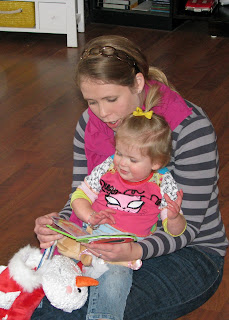 Grace got a new shirt from DressMe that I think she looks FABULOUS in!  (but of course being the tightwad frugalista that I am I bought it used off of Recycled Upcycles) 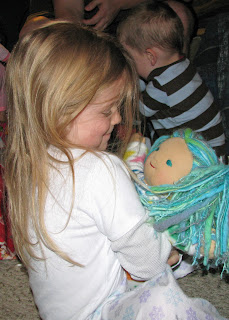 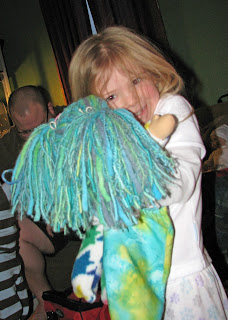 Kessa recieved a beautiful, one of a kind, hand made Waldorf doll from Snicklefritz Friends (have I mentioned I LOVE to barter?!?  If you make something cool and have an itch for some cute clothes for your kids PM me and I bet we can work something out!  lol ;) 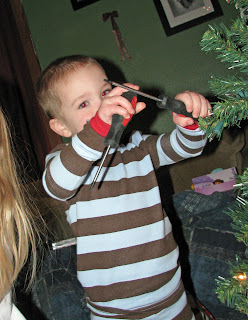 and THIS little dude...is becoming such a man.  He got REAL tools for Christmas and couldn't have been more pleased. 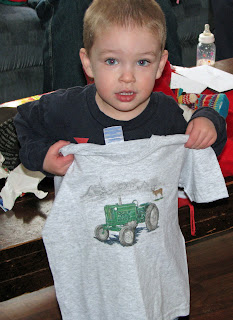 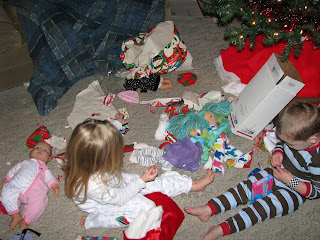 (that cool bracelet Ezekiel has on is an ID bracelet from The Owl and The Firefly)
We did have some attitude issues that were discouraging to deal with on and around Christmas, but God is faithful and they seem to be on the mend...at least until next Christmas.
Kessa also floored my husband's family when her Grandmother began reading the Christmas story from Luke 2 and she took over and quoted the entire thing. This wasn't something I sat down and made her memorize.  Last year at Christmas (when she was 3) we just read it every night before bed, and being the little sponge that all toddlers are, she memorized it.  That has been both an encouraging and convicting lesson to me about what I saturate her mind with...may it always be as beneficial as learning scripture!
I pray you and yours had a very merry Christmas and were reminded anew of the wonder and awe of God being made flesh...of Emmanuel....God WITH us.
Posted by Gina at 12:45 PM 2 comments:

And here we are again...what I wore Wendesday!  My goal for the upcoming week?  Better pictures!!! So sorry.

Sweater - Motherhood (I forsee a LOT of this sweater in the future!  So warm!!!)
Shirt - Duo Maternity
Pants - Old Navy Maternity
Earrings - Charmed 4 (via Water4Christmas)

Hmmm...have we seen this one before?  Anyway...
Thermal - Wal-Mart
Shirt - Motherhood
Belly Band - Run System
Jeans - Motherhood (different pair though!)
Have a blessed Christmas week!!!!  And just in case you, like me, need a little reminder, "Do Less, Be more"

as always...linking up with the ever wonderful and amazingly cute

Gina
Lovin' Jesus, hangin' with Hubby, & chillin with the chil'uns makes me one happy scrappy gal!